The Client: RMG Contracting is a small business in Toronto with a team of 20+ painting and plaster professionals. The Company has been running for over 10+ years using referrals only and had zero online presence. The primary service they were providing is removing the popcorn ceiling, which is an old-fashioned interior ceiling technique.

The Challenge: RMG Contracting saw that since the inception of 2015, many businesses are officially dragging popcorn ceiling removal as a service and advertising them using websites, creating a competitive environment in the market. Potential customers used online searches to find the “ Popcorn Ceiling Removal” service. When someone searched for the query, RMG wasn’t there. The Owner – George, understands it quickly and realizes he needs a website that can be found easily by local customers and optimized for mobile phones as well, increasing their digital presence, and eventually resulting in more customers. Moreover, George doesn’t have enough budget to spend and looking for something that costs him under $2000 for the first quarter of 2022.

The Solution: George relies on phone calls and mouth to generate leads for his popcorn ceiling removal business and tells us that his operations only run effectively in the Greater Toronto area. After discussing all his issues with Step2web, We soon realized that his problems could be solved with a professional website, Local SEO and some offsite work. Step2web created a user-centric and mobile-friendly website for them with a clear call to action. The images were optimized alongside futuristic SEO features such as OG tags, featured snippets setup and much more.

Also, for best SEO reach, we created geo-location pages alongside fresh content for their primary service i.e. “ popcorn ceiling removal,” which helped them get found for mini-search queries like “Popcorn ceiling removal Toronto”, popcorn ceiling removal Mississauga” and more. All these pages were linked to each other, such that they will pass the link juice in between. Alongside, the website was completely checked for any orphan page, 301 redirects, and 5xx server errors for better technical SEO. However, the page size was getting too heavy due to images that they want to show on the front and heavy plugins for before and after effects. To tackle that, we have added a Content delivery network in between which eventually delivers a better user experience and also has contributed to over 90+ scores in Google page insights. 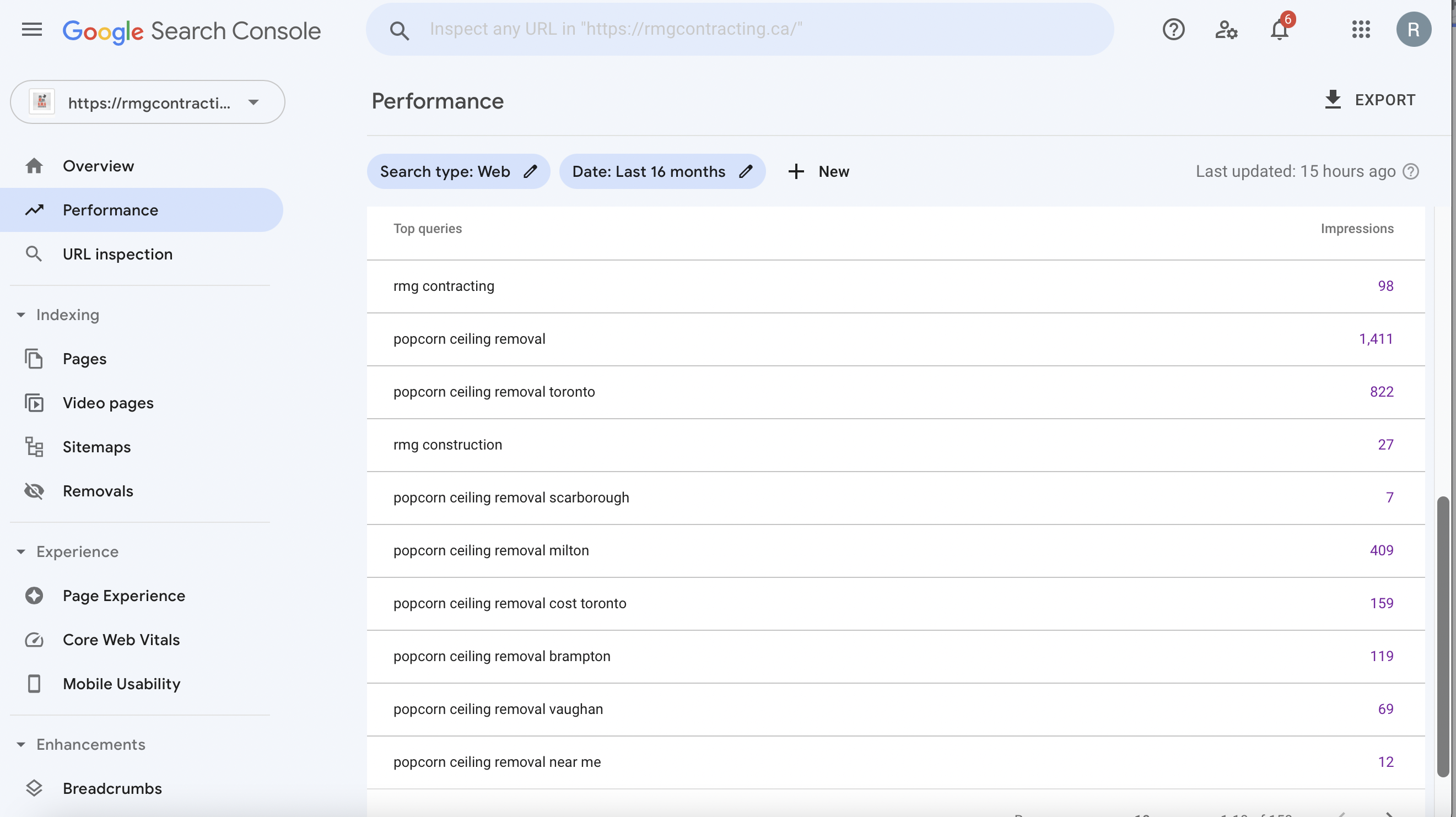 Also, we helped them set up social media pages for building more authority and integrated them with the website. Moreover, a Google My Business page had been set up such that they can collect reviews, which helps them create credibility over online customers.

Old Users are now able to find RMG Contracting online while a new customer base has been developed over the year. No extra marketing effort was put up during the period, and all the digital tasks were done in a span of 2 months with a budget of over $1500. RMG Contracting has a 5 star rating on Google reviews now and has been able to create an extra stream of clientele through local SEO. Do you have a similar business and wants to create a similar local SEO strategy for you, Contact us today.